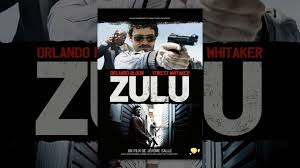 Zulu is a Jérôme Salle film produced and released in 2013. This is a crime, action, and thriller movie that keeps you alert till the final scenes. But it will bring out your deepest emotions of sadness, anger, and disappointment as well as impress you with the bravery and morale of the main characters.

The investigation leads them close to local drug lords and in one of those close violent encounters, Dan is deeply wounded and dies later on in the hospital. A local criminal has been accused of the death of the girl as well as for another woman's death that has been murdered the same way. The second victim has the sign of the Zulu drug group on her chest, but the police close the case by accusing Stan. The two police detectives conduct a private investigation to start with interrogating the victim’s best friend onwards to analyze the origin of the drugs. Their investigation leads them to the “Project Coast” and they uncover the identity of Doctor Joost Opperman, a scientist that was producing chemical weapons to be released in the Soviet Union in the time of the cold war. The “Project Coast '' was created to generate a biological weapon to eliminate the black race in the South African Territory.

This is a violent movie keeping the viewer alert and emotional about the suffering of the main characters as well as the victims of Doctor Joost Opperman. In parallel with the main action, there are the life stories of the three detectives. Ali has severe early childhood memories of his father being murdered and his mother being violently raped in front of his own eyes. Brian is going through a difficult time after his divorce having trouble stabilizing his life and his ex-wife Ruby is also getting involved in the story. The story leads these two brave men to the very heart of the drug lord’s headquarters and in the process of destroying his kingdom and arresting his collaboration, Ali, unfortunately, loses his life. Namely, Ali is pursuing the head of the drug group deep into the desert and as he managed to capture and murder him, he also dies. Brian and a group of police officers manage to find Ali the next day to provide him with a proper funeral.

This is a movie that was presented as a closing movie at the Cannes Film Festival in 2013 but it did not get released in the US till 2017. Based on Caryl Ferey‘s novel, critics say the director could have done a better job transferring the writings into this movie.