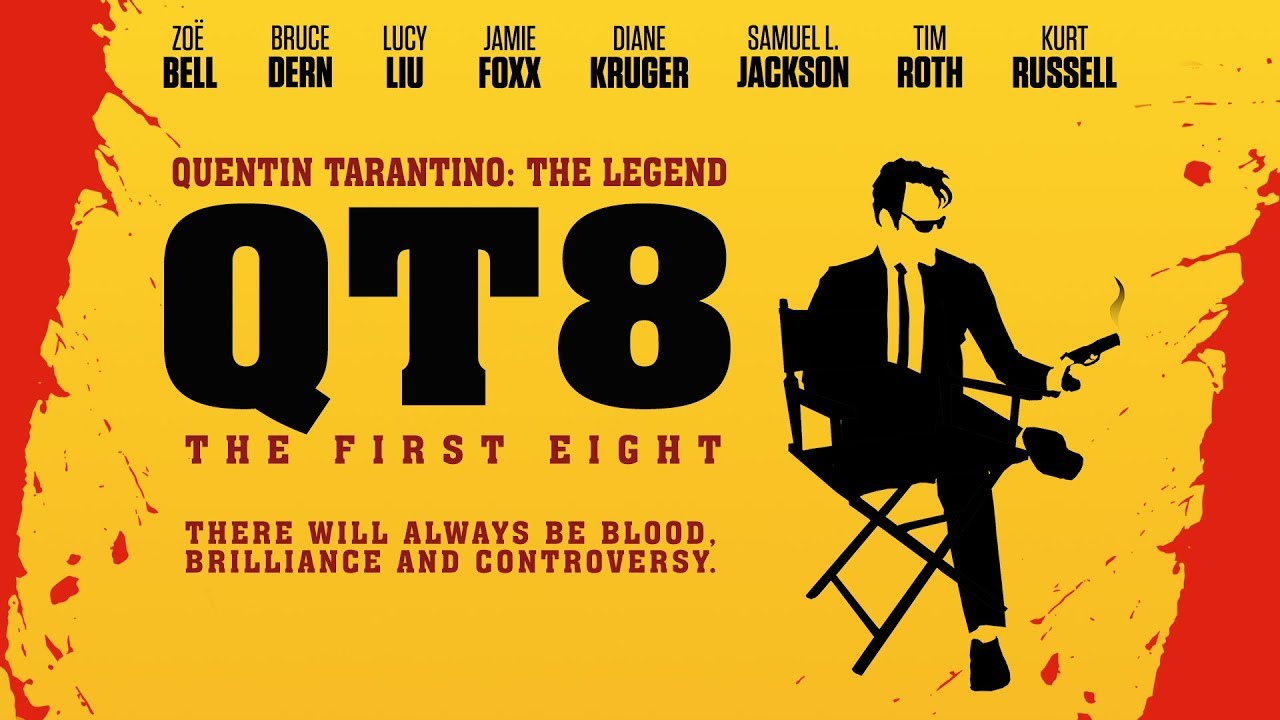 QT8: The First Eight is written and directed by Tara Wood and produced by Wood Entertainment in 2019. This critically acclaimed documentary gives us a unique perspective on Tarantino’s career and his creative process. Actors, directors of photography, and other professionals that worked on his cult films have been interviewed for this documentary. Film stars such as Jamie Foxx, Diane Kruger, Samuel L. Jackson, Lucy Liu, Kurt Russell, Michael Madsen, Eli Roth give us invaluable insight into creating some of the most memorable characters from the silver screen.

The documentary is focused on the first 21 years of Quentin Tarantino’s career. By interviewing most of Tarantino’s collaborators, Tara Wood chronicles quite well the career of one of the most prominent American film directors. The film follows his career from Video Archives to the release of his latest film, “Once Upon a Time in Hollywood.” This is more than just an ordinary analysis of Tarantino’s career or a simple collection of behind the scene materials. QT8: The First Eight is a well-executed dissection of the creative process of a film director that pushed the boundaries of mainstream cinema.

Michael Madsen remembers in his interview about the time when his agent called him and pitched him the idea about “Reservoir Dogs,” which quickly became a global phenomenon. The agent explained to him that everyone dies at the end of the film and that the honorary for the film is exceptionally minimal. Michael Madsen almost did not accept the role of Mr. Blonde because he was not incredibly happy that his character gets shot by co-star Tim Roth. There are plenty of anecdotes throughout the entire documentary. Even if you are not a Tarantino fan, you’ll still find this film very interesting and entertaining.

This documentary was released with great positive reviews from both the audience and the film critics. It has a 7.3 score on IMDB and a 93% audience score on Rotten Tomatoes.

“One of the strongest elements of “QT8” is the film’s evocation of the indelible female characters Tarantino has given us. Not just women who kick ass, but women who burn with a serious fire, like Pam Grier’s Jackie Brown or Uma Thurman’s yearning moll in “Pulp Fiction” or Thurman’s dynamo of vengeance in the “Kill Bill” films or the take-no-prisoners vixens who, in the first half of “Death Proof,” do nothing but drive and talk, magnetizing us (or, at least, some of us) the whole while.” - Variety