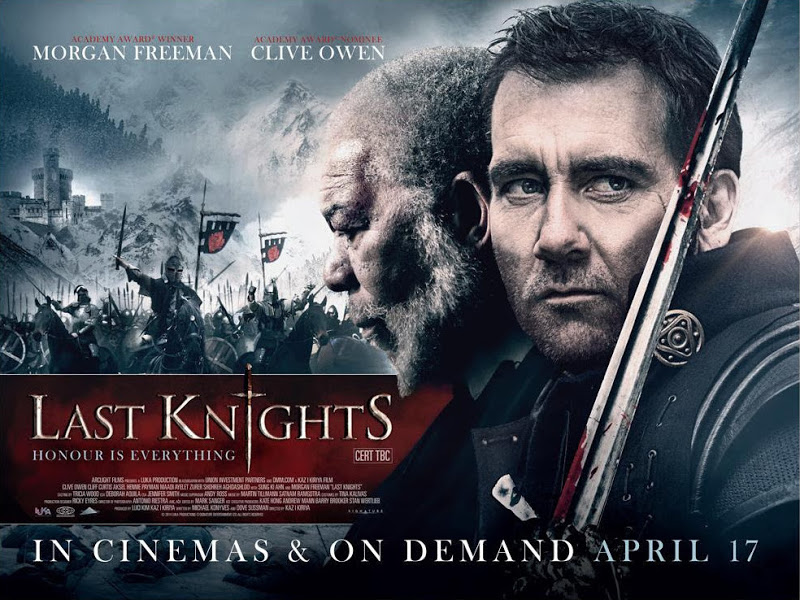 Last Knights is a 2015 action drama, directed by Kazuaki Kiriya, and written by Michael Konyves and Dove Sussman. The film is co-produced between the UK, The Czech Republic, and South Korea. The stars of the movie are Clive Owen who plays Raiden, Morgan Freeman in the role of Bartok, Cliff Curtis as Lt. Cortez, and Aksel Hennie who plays Geza Mott.

The storyline focuses on Clive Owen’scharacter Raiden, as the leader of a band of knights and their attempts to right the wrongs done to them and their people.

Captain Raiden (played by Clive Owen) is completely devoted to serving the house of Bartok (played by Morgan Freeman), his wealthy and caring Master. Second in command is another loyal knight, Lt. Cortez (played by Cliff Curtis). These knights live by a strong code of honor and respect for their Master, but when Bartok is dishonored by the Emperor's corrupt adviser, Gezza Mott (played by Aksel Hennie), the knights are dismantled. As Gezza demands more taxes from Lord Bartok (Morgan Freeman), he goes to his castle with Commander Raiden (played by Clive Owen) and his knights. He challenges Geza Mott and tries to kill him but the Emperor (played by Payman Maadi) sentences him to be beheaded by Raiden. Bartok’s estate is dismantled and his clan of warriors disbarred. As Gezza suspects that Raiden will try to take his revenge, he puts his trusted warrior Ito (played by Tsuyoshi Ihara) to ensure him that won’t happen.

After a year, Raiden is a drunk, hated by his men for killing Bartok, and a complete disappointment to his wife Naomi as well. Gezza is still concerned that Raiden will take some form of action to revenge his Master, and even gets more security detail and men who are supposed to complete the construction of his new estate. After he is reassured of Raiden’s drunken state and shameful behavior, he finally stops watching him.

This is the moment that everyone waited for, Gezza finally letting his guard down. After all, it is revealed that for a whole year Raiden and his soldiers pretended and sacrificed everything, just to fool Gezza about their complete defeat. Paitiently waiting for the right moment, they are reunited and ready to execute the perfect attack, and finally, avenge the death of their Master.