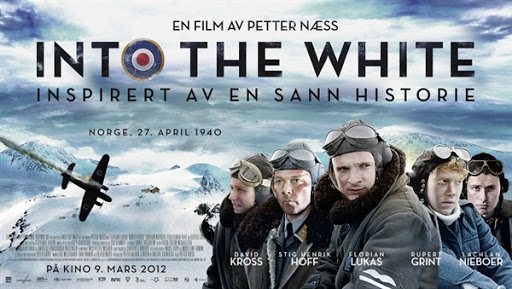 The Swedish and Norwegian co-production set during the Second World War is based on real-life events in Norway. This war film follows British and german pilots working together to survive harsh winters in the Norwegian mountains.

At the beginning of World War II, a British fighter plane confronts a German bomber somewhere over Norway. During the fight, both planes end up crashing in the mountains right before the winter storm begins. German pilots Lieutenant Horst Schopis (Florian Lukas), Josef Schwartz (David Kross), and Wolfgang Strunk (Stig Henrik Hoff) have to walk through the rough snow storm,  losing their supplies along the way. Finally, they stumble upon an abandoned hunter’s cabin and decide to take shelter there. Quickly after the crew takes refuge in the cabin, they are joined by the British pilot Captain Charles P. Davenport (Lachlan Nieboer) and the gunner Robert Smith (Rupert Grint). The British pilots end up as prisoners of the Germans. After the initial antagonism between the two crews, they all realize that they need to work together if they want to survive the harsh conditions of the Norwegian mountains. With very little food and firewood struggling to stay alive, they start chopping up whatever they can find in the cabin. As the plot unravels, the tension between the two groups begins to loosen, giving space for friendships to develop built on mutual respect and understanding, as well as a strong incentive to stay alive.

The fight for surviving the blizzard forced these men to bond and form an unlikely friendship in the midst of war. This film gives us a dramatic portrayal of the power of solidarity and comradeship. It shows us that we are all humans, no matter what side we are on.

“Although the bilingual dialogue’s a little stilted, the cast, including former Ron Weasley Rupert Grint (stretching himself as a Scouse gunner) and the dignified Florian Lukas ( North Face ), acquit themselves well, forging convincing and ultimately moving relationships as they learn how little petty political differences mean when starvation’s at the door.” – Games Radar

If you like films that explore the depth of the human experience in the horrors of war, then “Into the White” could be the right film for you. It has an IMDB rating of 7.2, and you can stream it right now.