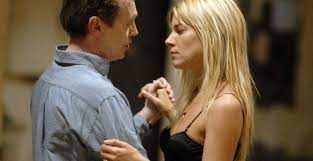 nterview is a 2007 remake of the Dutch film of the same name, directed by Steve Buscemi, who also stars in the leading role of Pierre Peders. Alongside Buscemi, other members of the cast are Sienna Miller who plays the role of Katya, Michael Buscemi in the role of Robert Peders, Molly Griffith as the waitress, and Tara Elders as Maggie.

The plot of the movie revolves around Buscemi’s character Pierre who is a tough political correspondent bitter to his editor who gives him the task to interview the soap opera star Katya (played by Sienna Miller) instead of covering more important stories, like a White House scandal. He eventually agrees to do the interview with Katya, and they meet at a restaurant. It is obvious that both of them don’t like each other and hate every minute of the interview, and just at they finish, Pierre is injured and brought back to Katya’s apartment. Once there, Pierre sees Katya in all of her glory, loud music, alcohol, drugs are consumed, and they start dancing and flirting with each other, trying to outmaneuver one another psychologically. Katya asks him to kiss her, and as he approaches her cell phone rings and she turns away. During another phone call, Pierre uses Katya’s laptop and sees a folder which he believes contains her diary, and as she confronts him about snooping he just says he was just Googling her, just like she suggested earlier. When her attention returns to yet another phone call, Pierre e-mails a rather emotional diary passage to himself. Like every journalist, he can’t just let go of what he has discovered and asks Katya why she has lost hope. She then confesses to him that she has cancer and that she has been hiding this secret from everybody. As he now knows her secret, Katya demands that Pierre shares one of his. He eventually admits that he is guilty of making up news stories and sources as a reporter and that he feels guilty for his wife’s death. Katya records the confession and swaps the tape when he is not aware, and a while later Pierre does the same. He doesn’t keep his promise and reveals her secret to his editor, and as he leaves her apartment, he receives a phone call from her. She tells him that not only she lied about having cancer, but she also has his confession tape, asking him whether she should send the tape to his editor or the police. Pierre tells her that he swapped the tape first, but Katya disagrees and says he only has her rehearsal tape.

The movie ends with both of them watching the tape, but it is unknown if she would follow up on her treat.