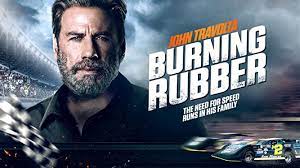 Burning Rubber is a love story and an action drama movie starring the great John Travolta and Shania Twain. This movie develops around the family relations being rediscovered when a young race car driver Cam  (Toby Sebastian) gets into a family and professional conflict with his father. Sam Munroe (John Travolta) as a veteran retired race car driver, needs to go back on the tracks to compete against his own son in a competitive team. Namely, Sam’s long-time rival, angry over losing a race, offers Sam’s son Cam the position of a top driver for his race team.

While this relationship is rising and heating up as burning rubber, in parallel, there is the relationship with Sam and Becca (Shania Twain).

Linsky, the competitive team owner, forces Can to crash into his father’s car, but not willing to do that, Cam avoids that crash. Therefore Linsky creates another opportunity for a crash and now for Sam’s car to crash into Cam’s at one of the races. This will cause fractures on Cam’s legs and he’ll be out of racing for several months. During this time Sam and Cam makeup and they understand that Linsky’s intention was to break this family apart as revenge. To get back at him, they decide to get back into racing, but they need a new car. Sam’s long-kept killer car 1970 Mustang that had killed his wife, is the perfect solution to acquire the money, buy the new car and get back into the races.

At the very end of 1970 Mustang Linsky finally admits the superiority of the Monroe’s and Sam finds peace beside his partner Becca.

The critiques on this movie directed by Karzan Kader are superior and positive, describing John Travolta as a perfect example of a working-class hero, fighting for what is good and right in life.

Another review describes it as not so much of a car racing movie, but a father/son relationship movie, with a rather soggy scenario.

Nevertheless, have a look at this movie on your own at W4FREE and bring your own judgment to the table. Is John Travolta at the age of 65 still a great actor as he was in Saturday Night Fever or not?

We look forward to your comments!