A Tuba to Cuba - A Feast For The Eyes, Ears, And Heart 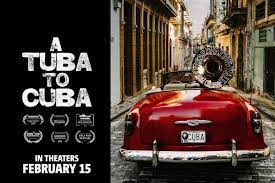 A Tuba to Cuba is a 2018 American documentary film about the Preservation Hall Jazz Band and their journey of retracing their musical roots. The leader of the band Ben Jaffe tries to fulfill his late father’s Allan wish of retracing their musical roots to the shores of Cuba and in the process, discovers the universal power of music to lift the human spirit and bond the cultural divide.

Allan Jaffe started a band, with himself on tuba, that became one of the first integrated music groups in the Jim Crow South. But in a city where music arises from every street corner, saloon door, and church window, the Jaffes found their band was a bridge over New Orleans’ racial divide. Ben Jaffe was a teen when his father died in 1987, and after college he took over the family band in 1993, playing double bass and tuba, which became the band’s trademark. Ben says in this documentary’s narration that his father always wanted to go to Cuba, feeling that a missing part of New Orleans’ musical history was there.

Finally, in December 2015 the band made its first trip to Cuba. Directors T.G. Herrington and Danny Clinch (a concert-film specialist) followed the seven-member band first in Havana, then to Santiago de Cuba and Cienfuegos. At each stop, they encounter musicians who keep alive Cuba’s traditions.

In many places in Cuba, the New Orleans bandmates discover, those traditions were born in Africa and landed in the Caribbean thanks to the slave trade. The rhythms of Afro-Cuban music and of New Orleans jazz are similar, as are the origin stories of racial division, poverty, and the uniting power of music.

At every turn, the Preservation Hall crew meets up with Cuban musicians, and it doesn’t take long for a jam session to start. One of the strongest moments is when the band first arrives in Santiago and finds itself horning in on a conga group in the street, who welcome the Americans as they form a Cuban version of a New Orleans second line.

Not everything plays smoothly in “A Tuba to Cuba.” Ben Jaffe’s narration can be very monotonous, and there are moments and montages that carry a whiff of an infomercial. But when the music is playing, this movie swings joyously and cheerful.